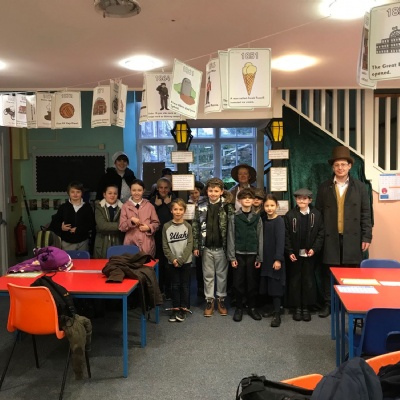 KS2 travelled back in time and experienced Victorian life in a woollen mill.

As we left Holbeton, the landscape looked like a traditional Victorian photograph – grey, dreary. Rain pelted down as children held tightly to their flat caps and bonnets. We embarked our carriage. Our destination: Cold Harbour Mill.

On the journey there, we passed the time with fun coach games, such as: ‘How many times can we say “Are we nearly there yet?” in an hour?’ and ‘Who can turn the palest shade of green?’

As we shivered off our carriage, we were greeted by Mr Robson, the manager of Cold Harbour Mill. Fantastically happy that he had a new batch of potential workers, he lined the children up in two rows: boys at the front and girls at the back. Mr Robson was surprised to see that the girls had long hair and insisted that, if they wanted to work there, they’d have to cut it short. He told us how Cold Harbour Mill was owned by Mr Fox – a kind boss who allowed you to have an extra hour in bed in winter so you only had to work 12 hours – and that he sold his wares all across the globe. He greeted each child in the class, learnt their names and…

…Oh no! A woman arrived late for work. Her son was ill and she had to see to him, but Mr Robson didn’t care! He gave her a 1 shilling fine! We tried our hand at some of the work that children would have had to do: polishing boilers, stacking bobbins and sorting out thread. Luckily, we were spared having to sweep the chimney! We learnt that, in the Mill, men were paid 2 shillings and 6 pence and women were paid 1 shilling. We agreed (in secret) with Annie that this was unfair; if women were doing the same work as men, they should be paid the same! We learnt that a man had been around the mill spreading word that they should create a union and demand fairer pay and more rights for workers. This didn’t go down too well. According to Mr Robson, he was reported to the police and promptly shipped off to Australia!

After the role play had finished, we were all incredibly appreciative that we didn’t live in Victorian times and that we could spend our time in a lovely school without fear of losing fingers!

We ravenously tucked into our lunches and discussed all that we had learnt. WS chanted back a motto that was repeated throughout the morning.

“Time is money!” he said, remembering the lesson taught by Mr Robson.

“The experience of a Victorian child was challenging!” whimpered AWS, exhausted.

Suddenly, a lady waltzed into the room, ready to show us how the machinery worked. We found out that Cold Harbour Mill is still a working mill! They produce rugs, fabrics (apparently Devon has its own tartan that they’re registered to make) and many other textiles. We followed the journey of wool: starting off on a sheep, being worked by mill workers to extract lanolin and how it is continuously stretched and twisted until it becomes the wool we’re familiar with.

After spending the morning being deathly afraid of Mr Robson, SL was pleased that she was able to find out how all the machinery worked.

BD said, “I loved that, after we were shown how the machines work, they gave us thread.”

Both children and staff had an amazing day learning about how different life was in the Victorian times! Have a look at our gallery to see what we experienced.